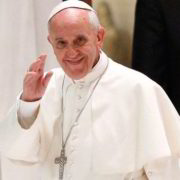 Ever since Saint Pope John Paul II asked that the teaching on the death penalty be reformulated so as to better reflect the development of the doctrine that has taken place in recent times, successive Popes have continued to clarify Church teaching in regard to the death penalty.

Today, the Vatican announced that a section of the Catechism of the Catholic Church would be updated in light of Pope Francis’ developed teaching that the death penalty is inadmissible in all cases “because it is an attack on the inviolability and dignity of the person.”

The revised section of the Catechism reads:

2267. Recourse to the death penalty on the part of legitimate authority, following a fair trial, was long considered an appropriate response to the gravity of certain crimes and an acceptable, albeit extreme, means of safeguarding the common good.

Today, however, there is an increasing awareness that the dignity of the person is not lost even after the commission of very serious crimes. In addition, a new understanding has emerged of the significance of penal sanctions imposed by the state. Lastly, more effective systems of detention have been developed, which ensure the due protection of citizens but, at the same time, do not definitively deprive the guilty of the possibility of redemption.

Consequently, the Church teaches, in the light of the Gospel, that “the death penalty is inadmissible because it is an attack on the inviolability and dignity of the person”,[1] and she works with determination for its abolition worldwide.

A full explanation of the change can be found on the Vatican website at:

We hope you join us in thanks for this hope-filled day. We continue our prayers that our state, nation, and countries around the world will continue to move toward protecting ALL human life

Want to join the discussion?
Feel free to contribute!